I never paid much attention to onion, not until the fieldwork we did in Bihać in March 2022, which was part of the subject Contemporary Migration, Citizenship and Ethnic Minorities. I was struck by the fact that onion is one of the main components of so-called game food, food that migrants take with them on their journey. This journey, also called the game, is long, exhausting and dangerous. Despite the very difficult conditions and the pushbacks carried out by the Croatian police and other police forces, migrants have enough hope and willpower to repeat the game as many times as necessary to reach their goal. A lot of thought goes into what food they will take with them on the game. The most common food they take is bread, but onions are also an indispensable element in every “game food,” as they call it. Why exactly is onion so ubiquitous?

I came across onions on my first day of fieldwork in Bihać, which ended at the so-called Baba Shop, a small shop that supplies food and basic necessities to both the local population and people on the move. The shopkeeper is nicknamed “Baba” by the migrants, and he sympathizes with them and helps them in solidarity. The shop offers phones charging and first aid to people returning from pushbacks, such as a bag of clothes and medicine. He is like a father to them in Bosnia, which is why they call him Baba. The word “Baba” means father in one of the languages spoken by the migrants. I was surprised that onions are some of the food taken to the game. During a later conversation at the shop with Safi, a twenty-four-year-old migrant from Pakistan, I learned that onions are actually the most important food on the route.

The food they take on their journey, so-called game food, consists of onions, bread, ketchup, mayonnaise, energy chocolate bars and drinks and water. Safi said that they take several loaves of bread on their journey, which they press together tightly. They also take one to two kilograms of onions. A backpack with food and important items for the journey can weigh up to twenty kilograms. Onions, along with bread, are the main staple and are almost always eaten with bread. I learned from various conversations that migrants cut onions and eat them with bread, adding ketchup or mayonnaise for better taste. They often eat raw onions, with no other food. This generally happens when bread goes stale.

Nineteen-year-old Aziz from Pakistan tells me that he doesn’t mind the taste of onion, and that he even likes it. It reminds him of the taste of lemon, which is strong but still good. I also learned from other conversations that most people don't mind the taste of onion and that they like it. When asked why they take onions on the game, almost all interlocutors answered that it is a good food for traveling and that it gives them energy. Most of them also mentioned the healing effects of onions, namely that onions are healthy, strong, that they give them energy, that they are good for the stomach and for eyesight. A very common reason given by my interlocutors was that onions last a very long time on the route and do not spoil. From the conversations I learned that the most important aspect of onions as part of game food is its practicality, but I believe that the aspect of habits may also be important.

Onions on the game seem to be a matter of course for them. Most people I talked to smiled when I mentioned the word onion because it represents something familiar to them and common on the game. All the young men I talked to take the same food and the same amount of items on their journey, which shows a certain uniformity. Perhaps they take onions because others take them too. Since we were in Bihać for only a short time, I can’t claim that everyone takes the same food to the game.

The diet of the people on the move I talked to in Bihać had changed a lot since the beginning of their journey. On the route, they eat food that is most convenient for them, which can withstand long distances and which gives them energy. Despite the fact that their eating habits have changed due to migration, they retain a strong memory of the food they used to eat. There is indeed a strong connection between food and memory (Mintz and Du Bois 2002: 107).

In a strictly realistic sense, eating can be defined as an activity performed by humans due to their need for energy. Nevertheless, eating is a multifaceted and multidimensional concept, with social, psychological, physiological and symbolic dimensions (Holtzman 2006: 362). The dimension of memory can be even stronger. Memory often refers to a set of very different processes and dynamics that can be understood in different ways, including the nostalgia that certain foods can evoke (Holtzman 2006: 362). Sutton (2000, 2001) notes how tasting food is a particularly intense and persuasive medium for memory, which is not only cognitive but also emotional and physical (Holtzman 2006: 365). In communities with a migrant experience, food is very important for remembering the environment in which they used to live. At the same time, food is also known to act as a catalyst for important political, economic and social changes (Holtzman 2006: 364).

During my conversations with migrants, I realized that onions are a food that was valued even in their originating countries. They already ate onions in Pakistan and Afghanistan, but they were prepared differently. What onions mean to them has also changed. Onions, formerly used to prepare various dishes and considered an intermediate element or only one part of a meal, have now become the main meal on the road. Onions are also used when cooking in squats, during the waiting periods between games. For the people I talked to, raw onions had become the most important ingredient on the menu. However, in our conversations, I did not think to ask whether it was customary to use raw onions as a takeaway dish where they grew up.

In Urdu, onions are called pîvaz (پیپر) (pronounced /piːˈvɑːz/). Aabis, a thirty-one-year-old migrant from Afghanistan, described what onions are like in Afghanistan and Pakistan: 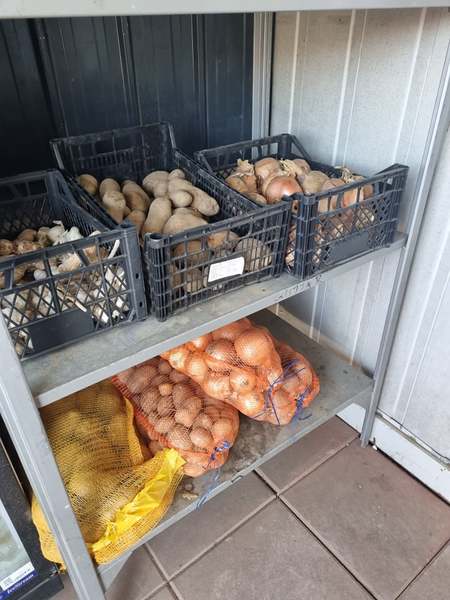 Sutton, David. 2001. „Remembrance of Repasts. An Anthropology of Food and Memory“. London: Berg.